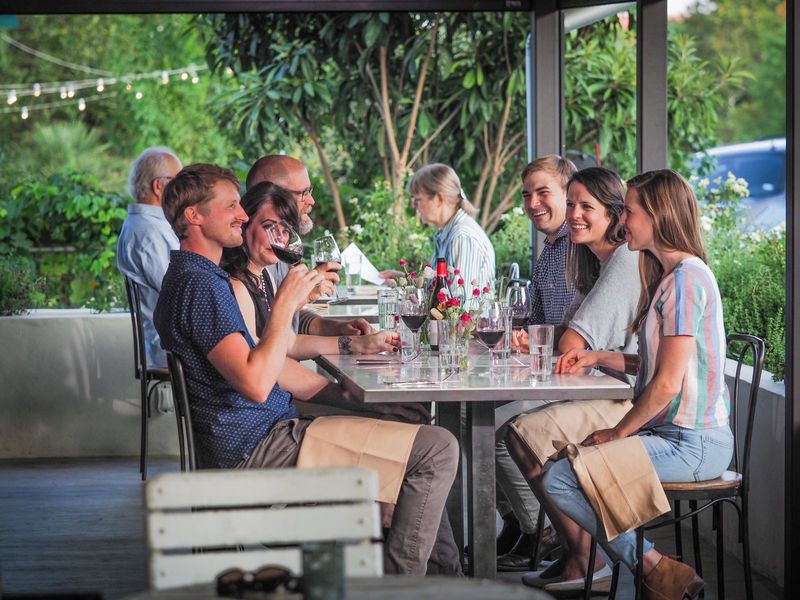 IN SMALL TOWN TEXAS, COMMUNITY INSPIRES JOHN AND EVELYN WASHBURNE AT HOME AND IN THE KITCHEN

My interview with John and Evelyn Washburne took place amid the first few uncertain days of COVID-19. The restaurateurs from Fredericksburg, Texas, had gone to the trouble of making their four eateries to-go only, just days before we spoke. However, the couple’s positive attitude shone through the phone line; I could hear the smiles in their voices. “Honestly, [this interview] is like a little slice of sanity. It’s nice to take a break from all of the other stuff,” John said with a chuckle.

John and Evelyn are the proprietors behind Otto’s German Bistro, an upscale Germanic cuisine restaurant; Tubby’s Ice House, a family-friendly taco and burger joint; La Bergerie, a wine, cheese, and charcuterie provisions shop; and Caliche Coffee Bar, a coffee and espresso bar on Main Street. They also have a fifth restaurant, an Italian concept, on the horizon. Pair that with three daughters under eight (whom they are now homeschooling due to the pandemic), and the husband-wife team have a lot on their plate—no pun intended. However, like those who walked Main Street before them, John and Evelyn are resilient and ardent.

Fredericksburg, with a population of 10,000 people, was founded in 1846 as a sort of "new Germany" under the Society for the Protection of German Immigrants, which included a mass emigration of Germanic people to Texas. Once the settlers arrived, they were, of course, greeted by indigenous peoples. The two groups formed a peace treaty that, interestingly enough, included bartering food goods. The townspeople would provide grain in exchange for wild game and honey. The treaty was never broken and the town flourished.

The people of Fredericksburg, according to John and Evelyn, have always worked together in times of need. “The thing is, even though these are unusual circumstances, this isn't any different than the way Fredericksburg normally is,” says Evelyn, a Fredericksburg native. “People here are just so incredibly thoughtful and kind. It’s really provided a beacon of hope in these really dark times.”

John and Evelyn explain their passion for their profession, for each other, and for their town.

Why did you decide that Fredericksburg was the kind of town that would not only be interested in a finer dining experience but make it thrive?

John: I had been working at Hoffman Haus [his parents’ business] and various bartending jobs around town, and I could tell from talking to tourists and locals that there was a desire for more food options. Fine dining wasn't necessarily mentioned in these conversations, but folks wanted a quality dinner place, and they seemed happy to pay a little more for a great experience.

How does Otto's take traditional Germanic dishes and give them new life? And how does the South creep into it?

John: When we opened, we changed the menu every week, and so once we blew through a lot of the traditional items, we started to play around with the product we had on hand, hence the duck schnitzel. The currywurst was inspired by Berlin street food where a currywurst is a bratwurst with curried ketchup. To mix it up, we put the curry into our bratwurst recipe. That doesn't mean we don't serve traditional dishes too, but we like to have a little fun every now and then.

John: And because this is Texas, we always have a steak on the menu too. Steak is the ultimate comfort food for Texans.

I’d like for each of you to describe the other’s role for your companies.

John: Evelyn's role is jumping and fluffing. She's really good at critiquing things, and that's been the hard thing to navigate. The critiques are always valid and important, and Evelyn is really good at it.

Evelyn: John's role is to be our guiding force. Otto's was his dream and even the quirky little things about Otto's are really a personification of John. It's what makes it special. In the most genuine way, all of our employees are always so happy to work for him.

John: I view myself as a facilitator. I try to plug people in the right situations. Evelyn and I see eye to eye on the big picture of the essence of what each restaurant is, but really, we just help put everything together.

What do your girls think of the restaurants? How are they ingrained in them as much as you are? What’s their favorite meal?

Evelyn: They love the sausage at Otto's. They probably eat three adult portions worth of just the sausage. Then at Tubby's, they're currently really into the grilled cheese. Which is a plain old grilled cheese but served on Texas toast.

John: One of my favorite things right now is if they wake up early enough, before we go to school, I'll take them out for a little coffee date at the coffee shop because it opens at seven. For me, it makes me feel really European. They have a scone, and I have my cappuccino.

Evelyn, you have a cocktail named after you at Otto’s, and there are aspects of your family that seep in. Was that intentional, or do you think that's something that happened because of how you guys run your businesses?

Evelyn: We're both from big families, and we both just grew up cherishing that. As things evolved with the restaurants, one of my brothers started working for us, and he runs our curing and cheese program at La Bergerie. John's sister Sarah is the CFO of our hospitality group, and she keeps us organized and does all of the things that, for other people, would be incredibly soul sucking. But she excels at it.

John: Otto’s has a family character to it, and I know it sounds hokey, but everyone that comes through the door, we treat like family. One of our former staff members coined it the best way: “Otto's is inviting friends over for a nice dinner, and Tubby's is a barbecue in the backyard.” That is exactly what we're about. You're in our dining room, and we're going to take care of you.

One of the things that struck me about Fredericksburg is that it is a town that has a history of very hardworking, very tough, and very community driven people. How do you think the town, and specifically you guys, will rise again when this is behind us?

John: Pretty much every business here is family run and is independent, whether it's mechanic shops or restaurants or retail. I've had tons of people reaching out to me and leaving messages of support. It’s affirmation that we all are going through this together, and I think we're going to come out of it just fine. I mean, it's going to be hard, but as a community, we're going to emerge from this stronger than when we went into it.